The following is not a meltdown (give me a break) and I use foul language (break number two please) So if you are offended by such language you should just move on to other things. My grammar may also suck. This means if you are an English teacher you may break out into hives or something while reading, otherwise I will assume you can figure it out. I hope I didn't overestimate anyone. Funny I usually don't have to make these points........ 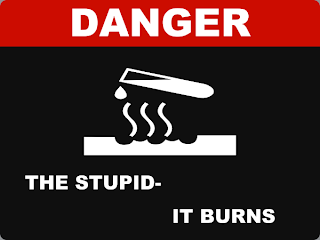 First, I'm not going anywhere. Second, if any single one of the morons who have been talking shit and pretending like they know who or what I am would like to own up to their assumptions and have real conversation with me then I am more than willing to do just that. If Jason The Lousy Canuck wants to talk shit let him do it straight to me. If Stephanie Zvan can't understand how she is being childish and why I think she is being a bitch then I am happy to tell her so personally. If any one of the judgmental groupies on the blogs Stephanie (or anyone else) has spent time writing about me has anything to say they too are invited to say it straight to me. The keyboard warrior bit may awe some of the more easily impressed people out there but I'm not one of those people. I guess I could sum it up as follows- Step up or shut up.

So to recap....Anyone who has dreams of "cleaning up" the internet can wake the hell up cause no one needs your services forced upon them. Stephanie, your 'effectiveness' is limited to say the least. Luckily you have your childishness to fall back on. Babble all you like and I will keep on presenting my opinions. I'm a part of 4 different podcasts, I write a blog,  I am on many social media sites, and I do guest spots on shows every so often. No one or thing is going to stop me.I have been doing this for years, people who know me know what to expect from me and now you know too don't you Stephanie Zvan?  Now what?

Oh and Stephanie could you please stop sending emails to my friends about issues you have with me? It is very annoying and kinda creepy. Thanks in advance
Posted by Unknown at 1:11 PM

Email ThisBlogThis!Share to TwitterShare to FacebookShare to Pinterest
Labels: A+, anyone else who likes to bully others, PZ Myers, queen of the earth, stephanie zvan

Promote Your Page Too